Queens Park Tennis Club secured the 2018 Parks League title in August after leading the First Division from the very first week of the competition back in April.

Last year’s champions Dyke were runners up, and Saltdean third. 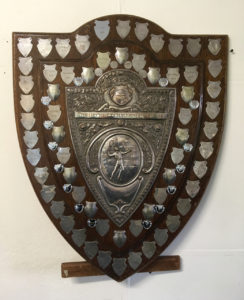 The Brighton & Hove Parks League, established in 1930, consists of 12 clubs putting out 40 teams across four leagues. Played exclusively on public parks courts in Brighton & Hove, the competition has over 600 registered participants.

Queens will take possession of the Beckett Challenge Shield title for a record 23rd time, making QPTC the most successful club in the history of the Parks League, ahead of Hollingbury and Hove (both 20 wins).

Congratulations also to Queens A, captained by Sam Waller-Carr, who finished top of Division Two, and will play in Division 1 next season. Saltdean B won Division 2, and Blagss A won Division 4.  See full results here.

It was the ladies who won it, according to Jacob Chadwick: “We had a squad of five of some of the best ladies players in the league – all very experienced and committed to Thursday night matches. It was often more of a head-scratcher as to who I leave out of the team, rather than who I put in – a rare problem for a captain in this league. The other good thing is that they are all very different players stylistically – giving lots of strategic options – for mixed doubles pairings in particular.”

“Whilst QPTC perhaps doesn’t yet have the very top individual male singles players in the league, it’s getting closer, and the strength on the mens side came from the depth of field and doubles-ability. Our starting four at the outset of the season – Matt Hassell, Rhys Daniel, Joel Pearcey and David Brockman – did a great job. But the ability of the substitutes to earn consistent points was, by the end of the season, equally as important.”